By
Armand Cabrera
Theodore Robinson was born in Wisconsin in 1852. At his mother’s encouragement, he enrolled in the Chicago Academy of Fine Art. His schooling was cut short by chronic asthma, which was aggravated by Chicago’s cold weather. Robinson returned home until he could save enough money for his education. In 1874, he enrolled in the National Academy of Design in New York City. 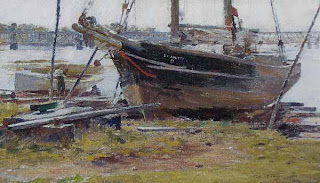 Robinson began to study with Jean Leon Gerome, a popular teacher of American students. Gerome was the foremost proponent of the Academic style. Gerome’s classes focused on accurately portraying the figure. An excellent student, Robinson was honored by having a portrait accepted into the annual Paris Salon. Robinson took some time off from his studies to join his friends in Grez, a small village outside the forest of Fontainebleau. In Grez, the students painted from life. It was here that Robinson became fascinated with the Impressionist idea of recording modern experience painted from life.

Robinson returned to New York in 1879. A few years later, he took a job teaching and creating mural projects for a decorating company. In 1884, Robinson traveled to Giverny. He met Monet and forged a friendship that lasted the rest of his life. For the rest of his life, Robinson split his time between Europe and America.

In France, Robinson began melding his formal training with the new ideas of Impressionism. He developed his own, personal style of Impressionism. In 1890, he was awarded the Web Prize at the Society of American Artists Show for his painting, “Winter Landscape”. It was the first Impressionist painting to ever receive the award.
Robinson refined his technique over the next few years, garnering acclaim and awards in America. Tragically, at only 43 years of age, Robinson died after succumbing to his plaguing asthma. 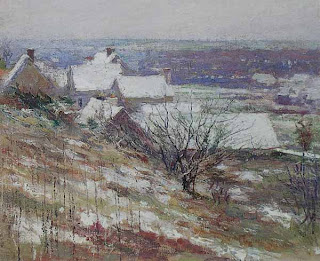 Quote
Although the possibilities are very great for the moderns (impressionists) they must draw without ceasing…and with the brilliancy and light of real outdoors-combine with austerity, the sobriety that has always characterized good painting.
-Theodore Robinson