by
Armand Cabrera
William Forsyth was born in California, Ohio on October 15, 1854. He was the oldest of four children. The Forsyth family moved to Versailles, Indiana when he was only ten, eventually they settled in Indianapolis.

During the Financial Panic of 1873, Forsyth left high school to help earn money for his family. He worked with his brother, painting stained glass window decorations in houses. Forsyth never returned to high school, although he was motivated to continue his education. He was a voracious reader of fiction and non-fiction and taught himself math. 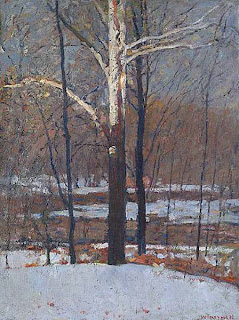 In 1877, Forsyth attended classes at the newly opened Indiana School of Art in Indianapolis. Although the school closed after only two years, Forsyth made contacts that allowed him to travel to Europe to study at the Munich Academy. Forsyth was formally accepted to the Academy in 1882. He studied drawing—first under Gyula Benczur and then Nikolaus Gysis. In 1883, Forsyth began painting classes with Ludwig Von Loefftz. After finishing his last year at the Academy in1886, Forsyth opened a studio in Munich with J. Otis Adams—another Indiana painter. Adams left for Indiana after only a year, but Forsyth stayed in Munich and finally returned to Indiana in late 1888. Upon his return, he opened an art school in Muncie with Adams. After two years, the school closed and Forsyth then joined the faculty with T.C. Steele at the Indiana School of Art.

Forsyth, Steele, Otis, along with Otto Stark and Richard Gruelle became known as the Hoosier Group. The group was influential in the Midwest and was one of the first regional art movements in the country. Forsyth also helped found the Society of Western Artists in 1896. Late the next year, Forsyth married one of his pupils, Alice Atkinson. She was 18 years his junior. The couple had three daughters. After the Indiana School of Art closed in 1897, Forsyth had a very long career teaching at the John Herron Art Institute in Indianapolis from 1906 to 1933.

William Forsyth died of kidney failure in February 1934 at the age of 80. 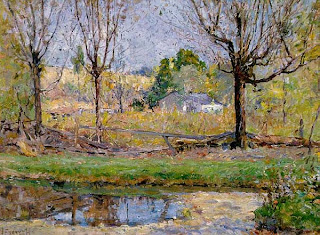 The Passage – Return of Indiana Painters from Germany, 1880-1905
The Indiana Museum of Art 1990
Martin Krause

Quote
Ordinary people only see the form, and not the mood outdoors. To them the clouds are white, the sky is blue, and the trees are green. The artist sees a great deal more than this to him the most attractive things are those that are expressed in some subtle way.~ William Forsyth