Howard Pyle was born on March 5 1853 in Wilmington Delaware. Born to Quaker heritage Pyle would be heavily influenced by his faith and upbringing. He studied art in Philadelphia with F.A. Van der Wielen for three years learning to draw from casts using sight size method. Pyle returned home to help with his father’s leather business he wrote his own stories and illustrated them. In 1876 at the age of 23 he had one of his stories accepted by Scribner’s Magazine. Optimistic with this success Pyle submitted more stories and they were accepted also.

An editor for Scribner’s named Roswell Smith encouraged him to come to New York where he would have more opportunities. That same year with letters of introduction Pyle moved to New York to pursue illustration and writing. 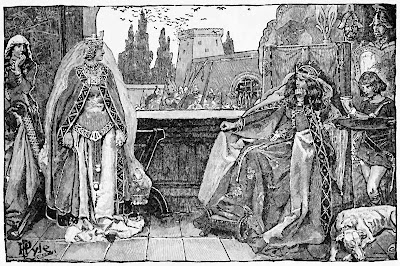 In 1883 He published The Merry Adventures of Robin Hood and secured his reputation as a writer and artist of ability. Many books were to follow including, The Wonder Clock, Otto of the Silver Hand, Men of Iron, and the Story of King Arthur and his Knights. By the time Pyle was 30 years old he had 100 of his illustrations published in magazines. 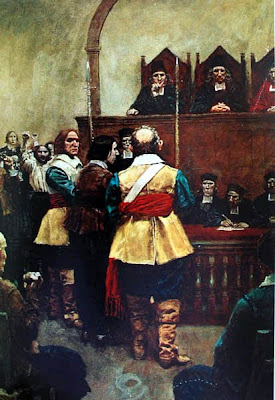 In 1900 Pyle began teaching for the Drexler Institute and his classes were an immediate success. Pyle taught two classes a week to allow him to continue his professional career as an artist and writer. His teaching was a response to his own instruction at an early age. He rejected the idea of mere copy work and instead taught the use of the model as a starting point for the imagination of the artist. This idea worked well and soon many of his students were successfully pursuing their careers in illustration. 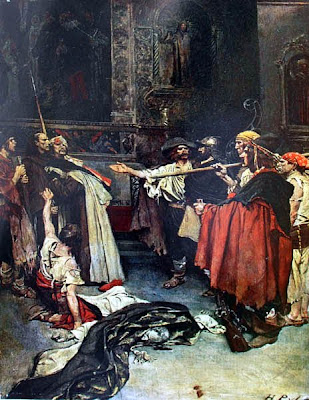 Frustrated by the lack of focus by some of the Drexler students and the overcrowded classrooms, Pyle resigned his post after two years. He immediately planned to open his own school built around serious students willing to work hard. He trained students from the model and outdoor painting in the beginning of their study and then in the art of picture making when their skills were ready for it. Pyle taught artists to immerse themselves in the characters or the scenes to live in the canvas and fill it with their emotions. 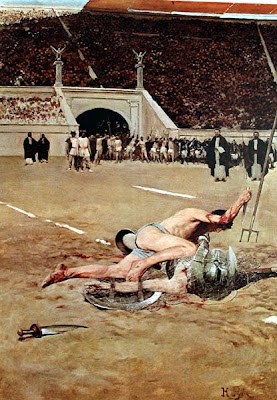 By 1906 Pyle became dissatisfied with many of his illustration assignments and turned to mural painting. He painted The Battle of Nashville for the Minnesota State Capitol and in 1907 painted The Landing of Carteret for The Essex County Courthouse in New Jersey. 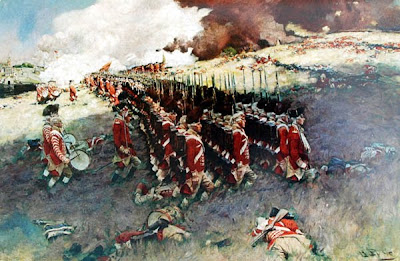 In 1910 Pyle finally decided to visit Europe. For most of his life Pyle had advocated an American perspective for his art rejecting European Art as unimportant but increasingly he felt its lure. Many of his artist friends were working in Europe where living expenses were much cheaper and so Pyle and his wife decided to move their family to Italy where he could study the mural paintings of European Masters.

Pyle never seemed to make the adjustment to the old world and was plagued by sickness.
Howard Pyle died from a kidney infection in Italy in 1911 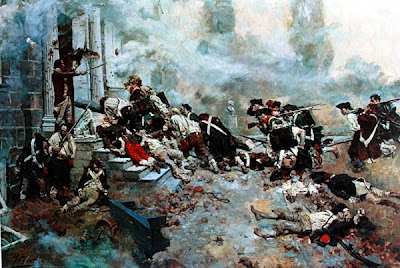 Howard Pyle was an artist, writer, teacher , mural painter and founder of what is now known as the Brandywine Tradition. He is called the father of American Illustration and helped to produce some of the greatest illustrators of the twentieth century. He produced over 3000 published illustrations in his career and wrote nearly 200 texts including short stories; quite a legacy for one man. 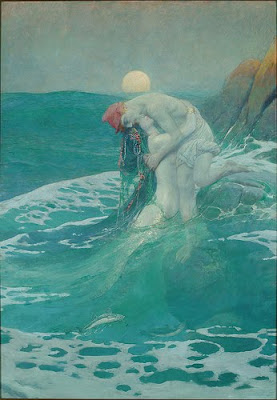 Bibliography
Howard Pyle
Henry C. Pitz
Howard Pyle
Rowland Elzea
The Brandywine Tradition
Henry C. Pitz
The Illustrator in America
Walter Reed
Quote
Art is not a transcript or copy. Art is the expression of those beauties and emotions that stir the human soul…Howard Pyle 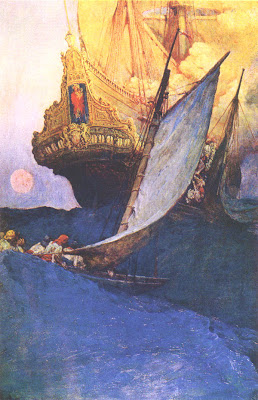 This week I had the pleasure of seeing the Howard Pyle Exhibit at the Delaware Art Museum. The Preview and show were well attended proving once again how starved the public is for this type of art. The exhibit really shows his range as an artist.
This is the largest showing of his work since his death 100 years ago. The museum also displayed the work of some of Pyle’s students, showing his influence as a teacher. Walking around with the other artists we were all struck by his use of color and value and his great eye for unusual compositions. 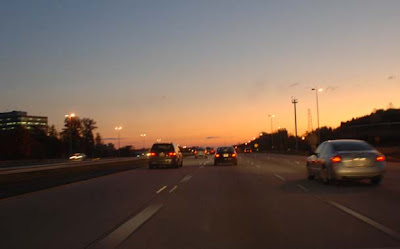 5am. When I was younger I would’ve been coming home at this time

In Chads Ford, 10 miles away at the Brandywine River Museum they also had a tribute to Pyle and some of his students, plus all seventeen of N.C. Wyeth’s Treasure Island Paintings on display.

Margo, myself, Jeanette, James, Jean Baptiste, Lester
My trip started with a 5:30 am Friday morning drive up to the Brandywine River Museum to meet James Gurney and his wife Jeanette, Jean Baptiste Monge and his wife Margo and Lester Yocum when the museum opened at 9:30am. Jim had these little pieces of paper with 11 on them and at 11:11:11 on 11/11/11 we took a picture of ourselves. I think it caused a rip in the space time continuum somewhere. 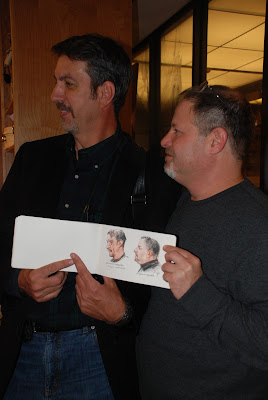 Myself and Garin and our portraits
After seeing the show we went and had lunch and were joined by two other artists Kevin Ferrara and Garin Baker.While we all  talked James painted watercolor portraits of me and Garin. 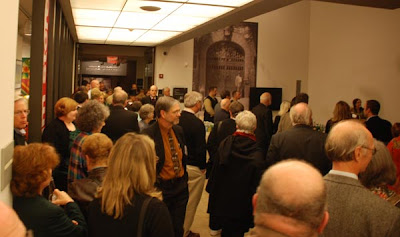 At 5pm there was a 2 hour preview party at the Delaware Art Museum which was very well attended.
Afterward, we left James and Jeanette who had prior committments, and found a diner and talked art for a few hours. 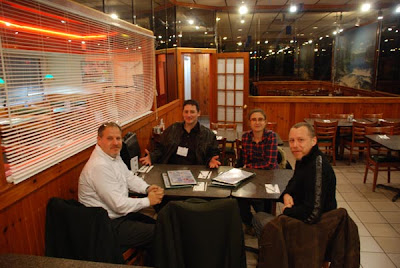 left to right, Garin Baker Kev Ferrara, Margo and Jean Baptiste Monge
Saturday, I was back at the Delaware to get an early look at the show before James Gurneys lecture. People were waiting for the Museum to open when I got there. As I was walking around with James and Kevin we met Noah Bradley who was up for the Lecture and show as well as Patrick O’brien. I was also introduced to John R. Schoonover and Ian Schoenherr.  James Gurney gave a 45 minute talk on Howard Pyle and Composition Techniques to a packed crowd. 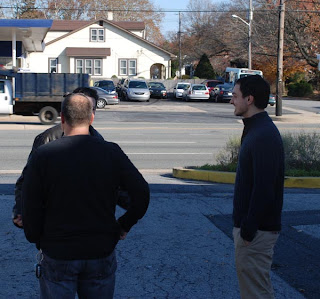 Kev Ferrara briefly eclipsed by Garin Baker and Noah Bradley
Afterward, a few of us took our lives in our hands trying to caravan to the diner we had been to the night before. After a few close calls we finally made it and enjoyed a simple lunch with more great conversation.
Heading home, I had plenty of time to think about Pyle and his legacy that still touches artists of all ages to this day.
If you are on the East Coast it is a must see show. 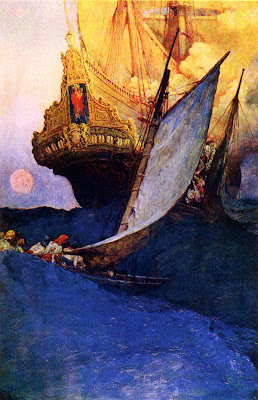 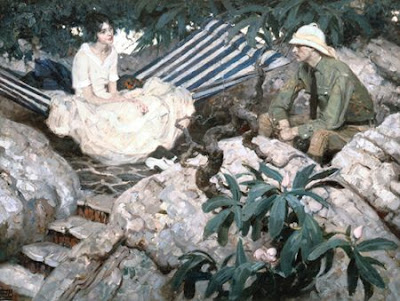 The Kelly Collection of Golden Age of American Illustrators including Leyendecker, Pyle, Cornwell, Wyeth, Dunn, Rockwell, Scheaffer, among others will be on display at the Frederick R Weisman Museum of Art at Pepperdine University. 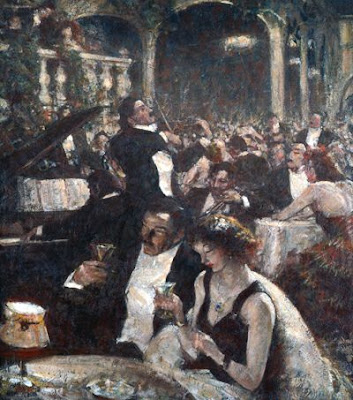 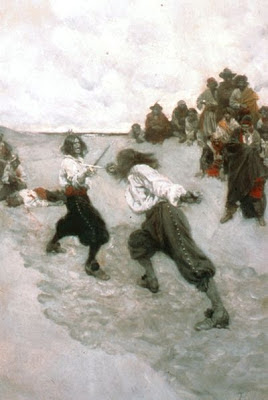 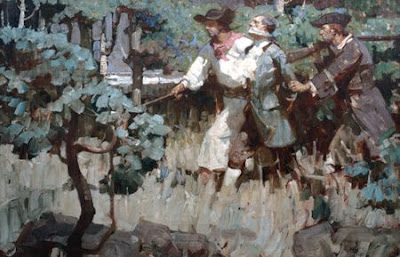 I want to thank Richard Kelly for sending me the information about this important show. 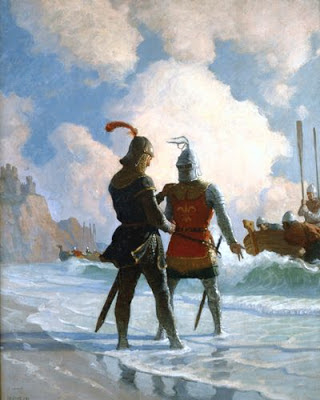