By
Armand Cabrera
Frederick Childe Hassam was born on October 17, 1859 in Dorchester Massachusetts. His name (pronounced HASS um) is a corruption of the English surname Horsham. In his late teens, Hassam worked as a wood engraver. He later pursued illustration while attending the Boston School of the Museum of Fine Arts. In 1882, Hassam presented his first of many Solo Exhibitions. This show, which contained over 50 watercolors of New England landscape subjects, was held at Williams and Everett Gallery in Boston—one of the city’s oldest galleries. In 1883, Hassam made his first trip to Europe. On his return to Boston, Hassam held another show at the Williams and Everett Gallery with more than 60 watercolors from his travels. 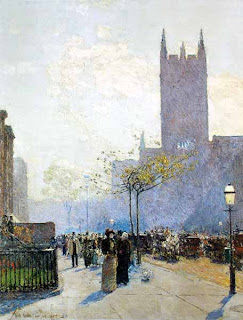 Hassam was married in 1884 to Kathleen Maude Doane and the couple moved to Boston’s South End. It was here that Hassam began to paint the city motifs for which he would become famous. These early paintings, while not true impressionism in execution, shared the same concern for modern subject matter. The paintings show more consideration for subtle tonal variations than bright color.

With the critical success of his paintings and a steady income from illustration, Hassam decided to go to Paris in 1886 for further study. He and his wife settled in Montmartre near Paris and Hassam enrolled in the Academie Julian where he studied under Jules LeFebvre. After a year and a half of study, Hassam was dissatisfied with the Academie. He turned his attention to exhibiting in Paris and displayed his work at the Paris salons of 1887 and 1888. Participating in the Exposition Universelle of 1889, he received a Bronze Medal. In 1889, Hassam and his wife returned to America. He was 30 years old.

Hassam and his wife moved to New York City. Hassam became active in many art organizations. He founded “The Ten” which included Willard Metcalf, William Merrit Chase and Frank Benson, among others. Although Hassam downplayed his European experience, it significantly affected his painting style. Hassam’s brushwork became more broken in application and his palette lightened.

Hassam was considered the foremost proponent of American Impressionism during his lifetime. He garnered critical acclaim as well as great financial success. After World War I, Hassam’s finest paintings regularly sold for $10,000 or more and his income from painting sales was rumored to be $100,000 in 1920. He died in East Hampton, New York in 1935. 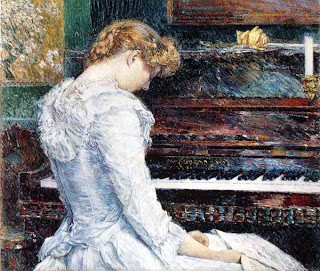 QuoteThe man who will go down to posterity is the man who paints his own time and the scenes of everyday life around him. ~ Childe Hassam