by
Armand Cabrera
Arthur Wesley Dow was born to a poor family in Ipswich, Massachusetts. After Dow graduated from High School, he was unable to afford to go to college. He did, however, receive further training from Reverend John Cowles, a retired seminary teacher, who taught Dow Latin, Greek and Mathematics.

Dow’s interest in art led him to study with James Stone and also to befriend Frank Duveneck. Stone and Duveneck had both studied in Munich, Germany. In 1884, Dow set sail for Paris to study at the Academie Julian under Jules Lefebvre and Gustave Boulanger. Dow studied diligently in Paris, setting his goal of 18 sketches a week. In 1885, Dow traveled to Brittany, staying in the small village of Pont Avon. It was there that Dow embraced the Barbizon aesthetic of painting from life. In 1887, his Brittany painting, A Field in Kerlaouen, was accepted into the Paris Salon. In 1889, two of Dow’s paintings were accepted into the Salon in addition to a piece being accepted into the Universal Exposition, where it won an “Honorable Mention”. 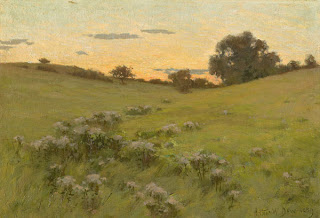 Dow returned to the United States in 1890, settling in the Boston area. He was artistically influenced after seeing prints by Japanese artists in a book. In 1893, he became Assistant Curator of Japanese Art at the Museum of Fine Art under the Director, Ernest Fenollosa. Fenollosa mentored Dow, helping him to refine his appreciation for Asian art.

Dow’s interest in Japanese art enabled him to write his monumental book, Composition, first published in 1899 and still in print today. Dow set forth a radical idea for the time— art need not imitate nature, but should develop organically from the formal abstract relationships of line, hue, and notan (a Japanese term referring to light and dark patterns within a picture) to improve upon nature to evoke feeling— Dow did not merely borrow the forms and style of Japanese art; he sought a blend of Western and Eastern art. His landscapes and prints were based on studies of nature using this synthesis.

In 1903, Dow became head of the art department at Columbia University Teachers College. Over a 30-year period, he taught at Columbia University Teachers College, The Arts Students League, Pratt Institute, and his own, Ipswich Summer School of Art.
Dow‘s teachings rejected the accepted concept that painting and sculpture were of a higher level than the applied arts, such as ceramics, furniture, jewelry, and photography. In his classes, Dow taught all these art forms. For Dow, all arts and crafts were of equal value and should be simultaneously beautiful and functional. This became a basic tenet of the Arts and Crafts movement in America.

Shortly after delivering a lecture on Dec. 13, 1922, Dow suffered a heart attack and died. 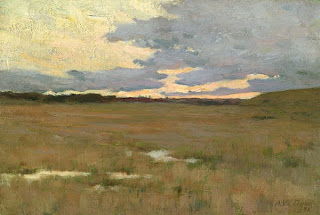 Quote
Art is the most useful thing in the world and the most valued thing. The most useful is always that which is made as finely as possible and completely adapted to its purpose: the most valued because it is the expression of the highest form of human energy, the creative power which is nearest to the divine.
~ Arthur Wesley Dow