Anthony Thieme was born in 1888 in Rotterdam, Holland. Thieme showed artistic promise from early on in his childhood. His parents did not consider art a wise career choice and tried to dissuade Thieme by sending him off to Naval School as soon as he was of age. At 14, Thieme studied at the Academie of Fine Arts in Rotterdam. Subsequently, he studied for two years at the Royal Academy of Art in The Hague. Thieme still could not convince his parents to support his desire to become an artist, so at the age of 17, he left home to pursue his artistic goals. 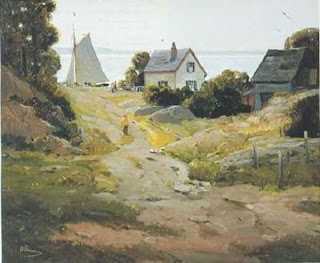 Thieme moved to Germany. He was employed as a Stage Designer while he continued to work on his painting skills. After three years, Thieme left Germany and traveled to Switzerland, then Italy, where he worked as a Stage Designer in Turin. In 1909, he enrolled in the Scuola di Belle Arti, studying for a year, then moved on to Naples. In Naples he spent two years sketching and painting. Moving to London, Thieme took the proceeds from the sale of some of his sketches and bought passage to New York. He was only 22.

He quickly found a job painting stage sets in New York. Although the pay was good, the work was unsatisfying to the young artist. Thieme began to travel again, always able to find work as a Stage Designer. He visited South America, France and Italy before returning to the United States. Thieme settled in Boston for a while, keeping a studio in Copley Square. While there, he did easel painting and illustration.

In 1928, Thieme had his first show, opening to critical acclaim. 1928 was also the year he won his first major award from the North Shore Art Association in Gloucester.

In 1929, Thieme married Lillian Beckett and bought a cottage in Rockport, Massachusetts. He opened the Thieme Summer School of Art. He ran the school until 1943. In Rockport, Thieme’s reputation continued to grow. His spectacular artwork of local scenes helped build the town’s reputation as an art destination. Thieme continued to travel extensively and after World War II, he and his wife wintered in St. Augustine, Florida.

Thieme became well-known for his ability to paint sunlight and shadow. Tragically, Anthony Thieme took his own life at the age of 66. 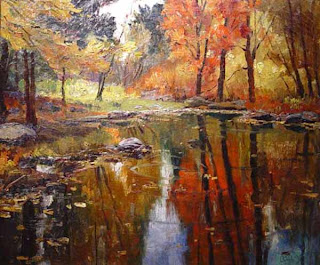 QuoteA good landscape painter must paint fast to catch the light of any hour. Unless you know what to put in, what to leave out, the result is a mess. ~Anthony Thieme