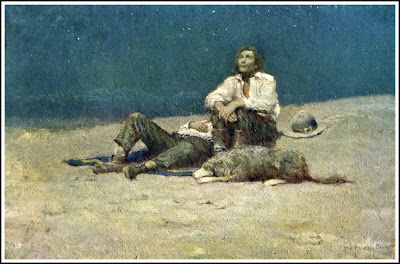 The lightest light and the darkest dark is in the eye.

Do not be so afraid that your picture will not be seen. Who tells you to make everything hard the art editors? Why if they knew how to do it themselves, they would not be art editors, they could not afford to.

Commence your picture by first establishing the three main values of your focal center, as hair, face and background; and work on that until you have it right. Then paint the rest of the picture in that tonal range and do not under any circumstances depart from it. With your main tones decided you have the key to all the remaining tones. Use all the tones you want within the established values.

A background can be painted in the same range of values as the foreground by reversing the light effect; painting the lights cool and the shadows warm in the shadow plane and warm lights and cool shadows in the sunlight plane.

Use separate brushes for warm tones cool tones and mixtures.

Use shadow tones of white for highlights on the dark.

You establish the key for the picture when you put down your first strokes for the flesh in shadow.

The center of the shadow tone in a large light area may be lightened to throw more light in the shadow, as the edge will carry the mass. 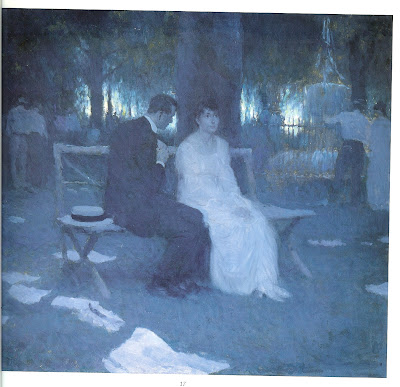 Paint related masses together as one. It will simplify the composition and give greater carrying power to the masses.

Where a few details will serve to convey the idea, don’t use many.

In a decoration do not go into factual detail or anything else that does not contribute to the decorative effect.

In design darks may be used anywhere, but in representing natural phenomena they must follow visual laws.

In decoration contrasts must be softened in receding planes.

The light pattern and shadow pattern of a design must be kept apart.

If the light source is cool the shadows must be warm.

If the shadow tone of white is high in value eliminate as much as possible from the background.

In design tie the sides of the shape together with a pattern of shadow. Then draw in the form with deep shadow (dark) leaving the light area to the last. The whole picture will thus fall into a simple scheme of light, halftone and dark.

A man of but mediocre talent who is furiously driven by deep desire will get somewhere. He who doesn’t desire deeply isn’t hurt much by failure. 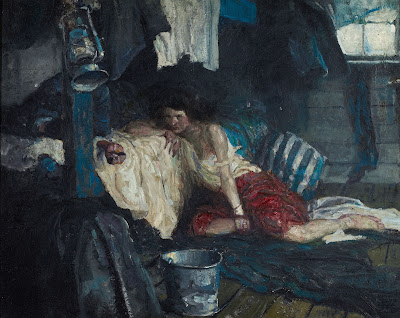