Peder Severin Kroyer was born in Stavanger, Norway on Midsummer Eve, 1851. Midsummer Day traditionally is recognized as June 24th—the Feast of John the Baptist. His mother suffered from manic depression and was unable to care for little Peder. He was raised by his mother’s sister and husband.

Peder attended the Academy in Copenhagen, receiving a Gold Medal for painting upon graduation. He was twenty-two. His first trip abroad was in 1875, traveling first to the Swiss Alps and then to Germany.

In 1877, Peder entered Leon Bonnat’s class in Paris. In this class, Peder learned to simplify his painting technique, going for the big overall effect. This was contrary to his former training, which focused on modeling each form, one at a time. While studying with Bonnat, he made trips in the summers to other parts of Europe, visiting Brittany, Spain and Italy. 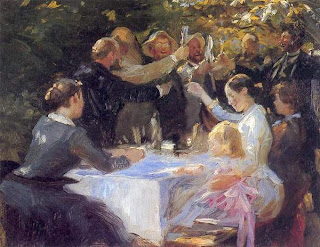 In 1881, Peder returned to Copenhagen and opened a studio. In 1882, he visited the artist colony at Skagen—a remote fishing village in Northern Denmark. He painted genre scenes of the villagers during the summers and returned to Copenhagen, painting formal portrait commissions in the winters.

In the 1880’s, Peder was influenced by the Impressionists and his palette became lighter and more colorful. His open air genre scenes garnered him much praise and attention and he received many portrait commissions. In 1889, he married Marie Triepcke. Peder began suffering severe bouts of depression, hospitalizing him for months at a time. He had inherited the same mental instability that had afflicted his mother. In 1905, his marriage fell apart.

The last ten years of his life, Peder’s eyesight deteriorated until he was completely blind. Even though he was in poor health, he painted almost to the end of his life. Peder Kroyer died in 1909 at the age of 58. 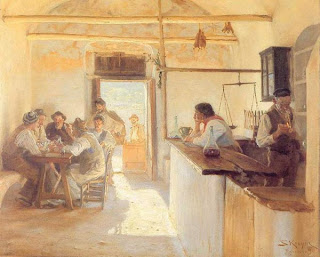 Quote
What one does on the spot in the nervous ardor is always better than what one does the day after in the tranquil light of the studio. When one is sitting outside and one knows that in ten minutes the atmosphere will be gone, one does not argue, one works away with raging zeal. ~Peder Kroyer