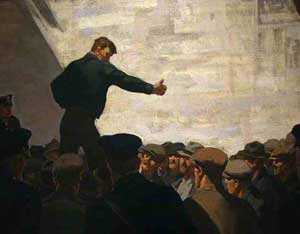 I know this must annoy some people out there but this is reaching epidemic proportions and so in the interest of artists everywhere I am going to stay on this until people get it through their thick skulls.
Never work for free. If any for-profit entity asks you to do something for them you need to charge for your services. Giving them away in the hopes of getting something later really means you aren’t qualified to be paid in the first place. This means you have to work harder to get your skills to a professional level. It’s not smart to give them away in the hope no one will notice it is substandard.
The gallery art market is less prone to this behavior than illustration and production art because galleries want 40% or 50% to represent an artist in their shop. Obviously giving things away isn’t a sustainable model under those circumstances
Think about what it means for illustration though. How does this illustrator pay the bills working for free? They can’t, they can’t pay anything obviously which means they must work at another job or depend on someone else to foot the bill while they selfishly play at their desired profession at other peoples expense.
Art is hard, not everyone can make it as a professional. Undercutting working wages is not ethical; not by the people who ask you to work for free or the people who do work for free. Think about that the next time you think your self-interests are more important than the industry you are helping to destroy, by giving away services.
Part of the problem here for younger people are that businesses have abrogated their responsibilities. They operate at such a dysfunctional level they aren’t really professional concerns. Anyone in the digital age can throw up a website and claim to be a game or VFX studio even though they can’t actually afford to pay people to work with them. There is a name for this kind of concern, it is called a hobby. It means because you don’t actually make enough to sustain yourself you aren’t a real business.  Maybe someday you will be but until you make enough money to support yourself you’re an amateur or hobbyist, take your pick. Your hobby doesn’t give you the right to take advantage of people or lie to them about how the experience from working on your idea is a stepping stone to paid work, 90% of the time it won’t be.
Don’t just take my word for it here is an article about unpaid internships
http://www.epi.org/blog/unpaid-internships-scourge-labor-market/
here is the highlight of the article
In 2011, the National Association of Colleges and Employers, which conducts an annual survey of graduating seniors, made an attempt for the first time to measure the effectiveness of various internships—for-profit, non-profit, state or local government, and federal—by whether they were paid or unpaid. Unpaid internships, it turns out, provided no advantage in terms of full-time job offer rates or starting salary, while paid internships provided a substantial advantage. In fact, unpaid internships in government proved to be a disadvantage in terms of job offers and in every category were a serious disadvantage in terms of starting salary. The average student who had taken an unpaid internship in a for-profit firm earned $18,000 less than students with paid internships and $3,700 less than the average student who had never taken an internship. Students who had had paid internships in the federal government received salary offers averaging $48,668; their colleagues with unpaid federal internships were offered only $33,127, on average.

Unpaid work is exploitation. It is illegal, and colleges and universities should reexamine their role in promoting it. And as Ross Perlin, the author of Intern Nation bluntly puts it, “It’s time to enforce the law.”

7 thoughts on “Never Work For Free!”