I was awarded this commission through a design company I work with from time to time. The client initially liked a barn painting I had done. The image for the original painting was 20 x 24. For the mural the client wanted the painting to be 119×19 almost five times the original length. I mocked up the new version in Photoshop for approval and once the okay was given I started the project. 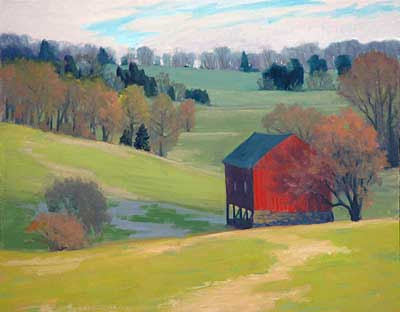 The first thing I needed to do was build a frame work for the linen. I decided to just tack the linen to the framework and after it was completed roll it up and ship it to the clients where it would be stretched and framed for the hotel. The framework consisted of three pieces of 2 x 4 foot birch panel held together with 1 x 3 pine. This would allow me to sit it on my easel and secure it. The easel is counter balanced and slides side to side making it easy to paint awkward sizes like this. 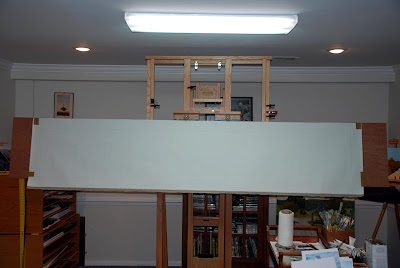 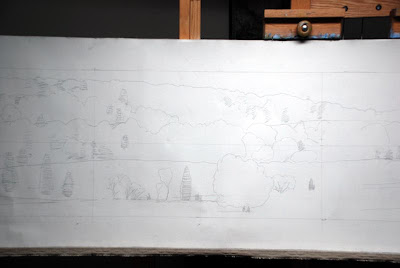 For the drawing I divided the image space into twelve horizontal and two vertical sections to make it easier when placing the elements. The drawing took me 9 hours. 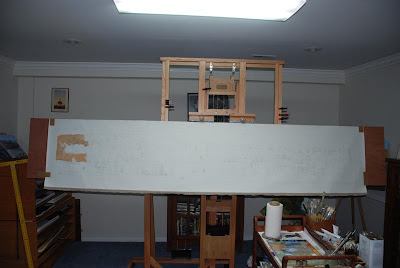 I mixed some test colors for the foliage before I made up the large piles of paint and I blocked in the dark cedar trees and some other key elements as guides over my initial drawing. 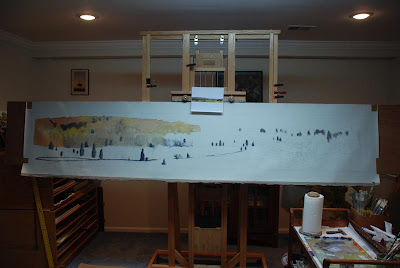 For the block in I worked on the background and then the foreground saving the middle areas for last. 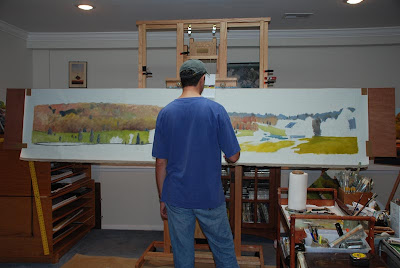 This way I would get the two extremes in hue and saturation shifts established making the middle section easier. The block in took me 10 hours. 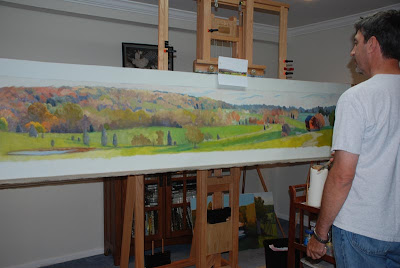 The last few days were spent refining and adding details where appropriate. I changed the middle of the painting, moving and shrinking a tree between the barn and pond that I thought looked good in the initial digital mockup but was distracting at full size. The total time for the painting was a little more than sixty hours. 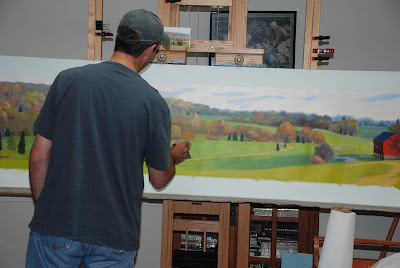 This is the first mural I have done in many years. There were three done for businesses back in the seventies and eighties, a store in Hawaii (6×15 feet) and a restaurant (9×12 feet) and store in California (12 x24 feet).Those are long gone, they were painted directly onto the walls and did not survive the remodeling process and in one case the store was demolished for a newer store.

I’m hoping because it will be mounted and framed it might make it through the inevitable remodeling ten or twenty years down the road. The Mural will be in the Gaylord Opryland Hotel which reopens on November 15th 2010 in Nashville TN
http://www.gaylordhotels.com/gaylord-opryland/

6 thoughts on “Creating a Mural Step-by-Step”