Lovell Birge Harrison was born in Philadelphia, Pennsylvania on October 28, 1854. “Birge”, as he called himself, received his initial training as an artist at the Pennsylvania Academy of Fine Arts. In 1876, Birge studied in France for four years under Carolus Duran, Jules Joseph Lefebver and Gustave Boulanger.

In the summer of 1880, Birge and his brother, Alexander, journeyed to Pont Aven and Concarneau on the Brittany Coast. In Concarneau, Birge became acquainted with Bastien Lepage. Lepage was a strong proponent of painting directly from nature and had a following among the academic art students of the time. Lepage painted in a way that was a marriage of academic fundamentals and Impressionist motifs. Birge became friends with Lepage and was influenced by his philosophy on painting and his working methods of painting from life. 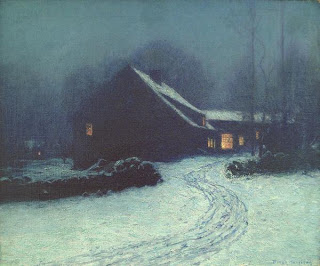 In 1889, Birge received a Silver Medal for his painting, November, at the Universal Exposition in Paris. Birge became the first director of the Art Students League Summer School in Woodstock, New York. From 1905 to 1911, he taught painting classes there. Birge wrote articles on painting for Scribner’s Magazine, North American Review, International Studio and Palette and Brush Magazines. In 1909, he published his landmark book, Landscape Painting, which is still a major influence today. In 1910, he was voted into the prestigious National Academy of Fine Arts.

Birge is best known for his ethereal, Tonalist winter and moonlit scenes. His work is characterized by soft edges and strong design and beautifully subtle color harmonies. Birge remained a strong proponent of the Tonalist aesthetic his entire life. His teaching and writings influenced many generations of painters in America. Harrison died in Woodstock on May 11, 1929. 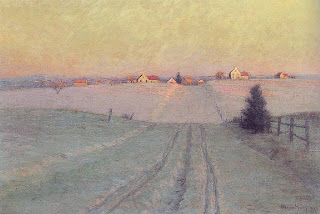 QuoteWe devote ourselves to out-of –door pursuits; we have learned to love out-of –door nature and beauty. It is our best achievement as a nation; and our artists in this are therefore simply keeping step with the march of modern civilization.
~Birge (Lovell) Harrison.

1 thought on “L B Harrison”