John Fabian Carlson was born in Sweden—the son of a tailor. The Carlson family immigrated to New York when John was nine. At fifteen, Carlson studied in the evenings with Lucius Hitchcock at the Albright School in Buffalo. He worked as a lithographer during the day to help support his family until he was 28. He then moved to New York, having received a one-year scholarship to attend the Art Students League. At the League, he studied with Frank DuMond. In 1904 Carlson won a prize to study with Birge Harrison at Woodstock. 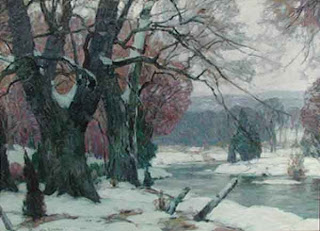 When the Arts Student League opened summer classes in 1906 in Woodstock, Carlson recommended Harrison be hired as the schools first teacher. Harrison, in turn, hired Carlson as his assistant. Carlson remained Harrison’s assistant until 1910. Upon Harrison’s retirement, Carlson succeeded him as director in 1911. He kept the director’s job until 1918. He then served two years as co-director of the Broadmoor Art Academy in Colorado from 1920 to 1922. Carlson then returned to open the John F. Carlson School of Landscape Painting in Woodstock where he worked until his death in 1945. Carlson won many awards in his lifetime and was elected full Academician to the National Academy of Design in 1925.

Carlson’s romantic realism is still an inspiration to this day. He had the ability to organize and simplify nature in such a poetic and personal way that is beautiful to behold. His design and color sense only heightened the lyrical quality in his art. He had a special affinity for trees and forest interiors. Most of his large canvases were painted in the studio from smaller outdoor sketches. Carlson’s book, Carlson’s Guide to Landscape Painting, is the bible for beginning painters and serious professionals. His thorough, honest approach and clear ideas set forth in the book have trained many painters. The 75+ years the book has stayed in print has proven its veracity to continued generations of artists. 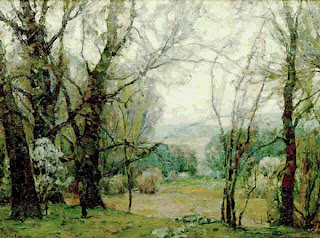 Quote
We are all living in a neurotically impatient age, when everyone strains to attain to virtuosity without having had to do the accompanying labor. I repeat labor. For all great men have been prodigious workers: in fact, they appall us with their energy and enthusiasm. They challenge obstacles with something akin to fury, where a weak man would shun an effort. ~ John F. Carlson