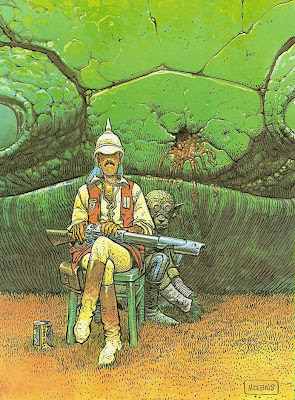 The French artist Jean Giraud, who went by the pen name Moebius died on March 10th 2012 after a long illness, he was 73.

I was first introduced to his work in the 70’s when Heavy Metal, the American reprint of Metal Hurlant hit the stands here in the USA. For someone raised on American comics his work was boundary stretching and beautiful. He drew like no one else and elevated comics to an adult level in theme and content. His line work was precise and seemed effortless, like Fred Astaire with a pen; you knew it was a lot harder than it looked. 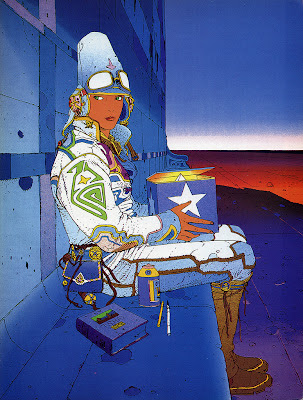 He was not a super hero guy, although after modest success here in America he did draw some super hero comics for Marvel. He had an exquisite sense of design and color, a wry sense of humor and a seemingly endless well of creativity. He worked doing design for movies like Alien, The Abyss and The Fifth Element. He got his start drawing Blueberry, a western but is primarily known in America for his series The Airtight Garage and Arzach 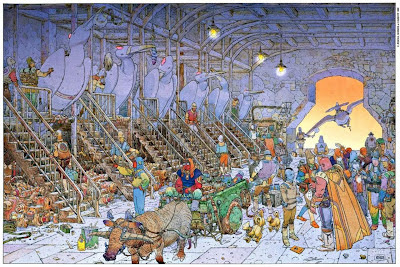 I had the pleasure of meeting him at a show of his work in the San Francisco Bay Area in the Nineties. There were 100 pieces of art on display at the show, everything from comic pages to film design to personal work.

He was soft spoken and gracious. He seemed genuinely surprised that people loved his work and you felt he really didn’t care about success or fame and would much rather be drawing. He was an artist’s artist in that sense. 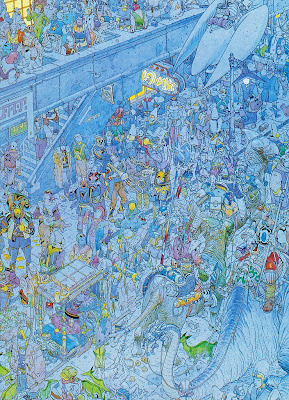